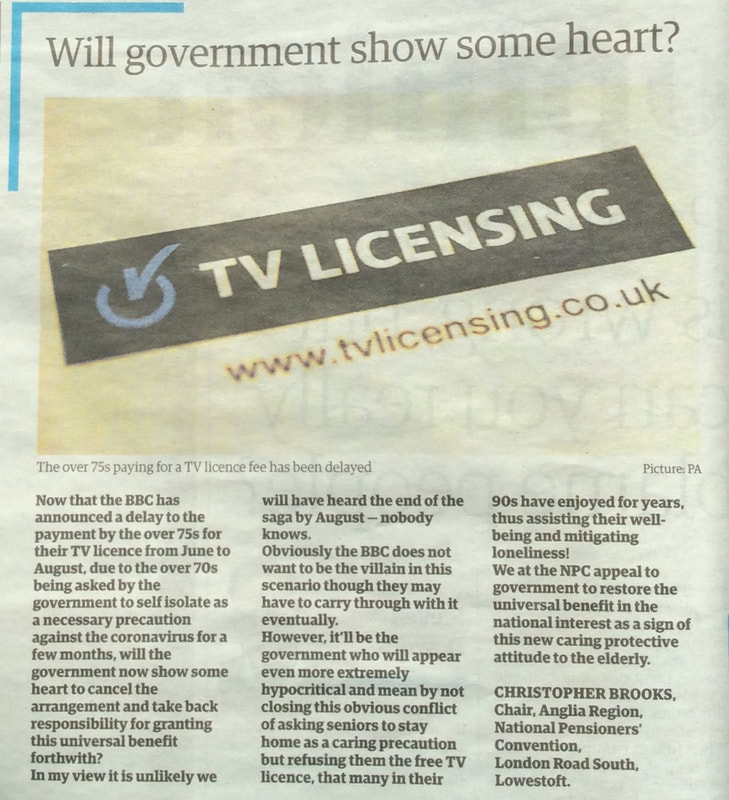 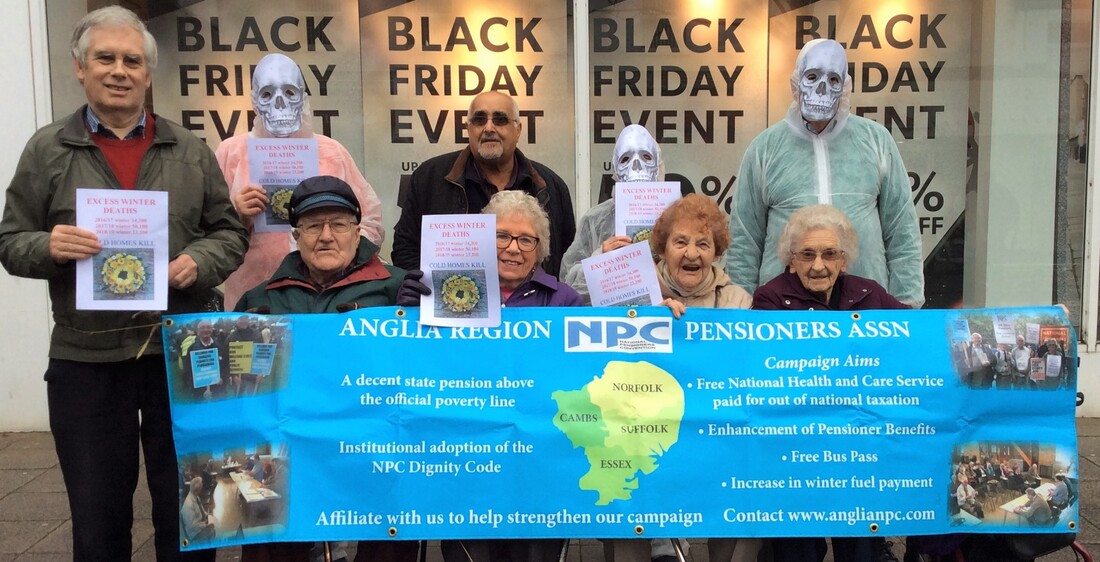 Outside in the main shopping street (above) with inquisitive locals and a curious young herring gull (below). 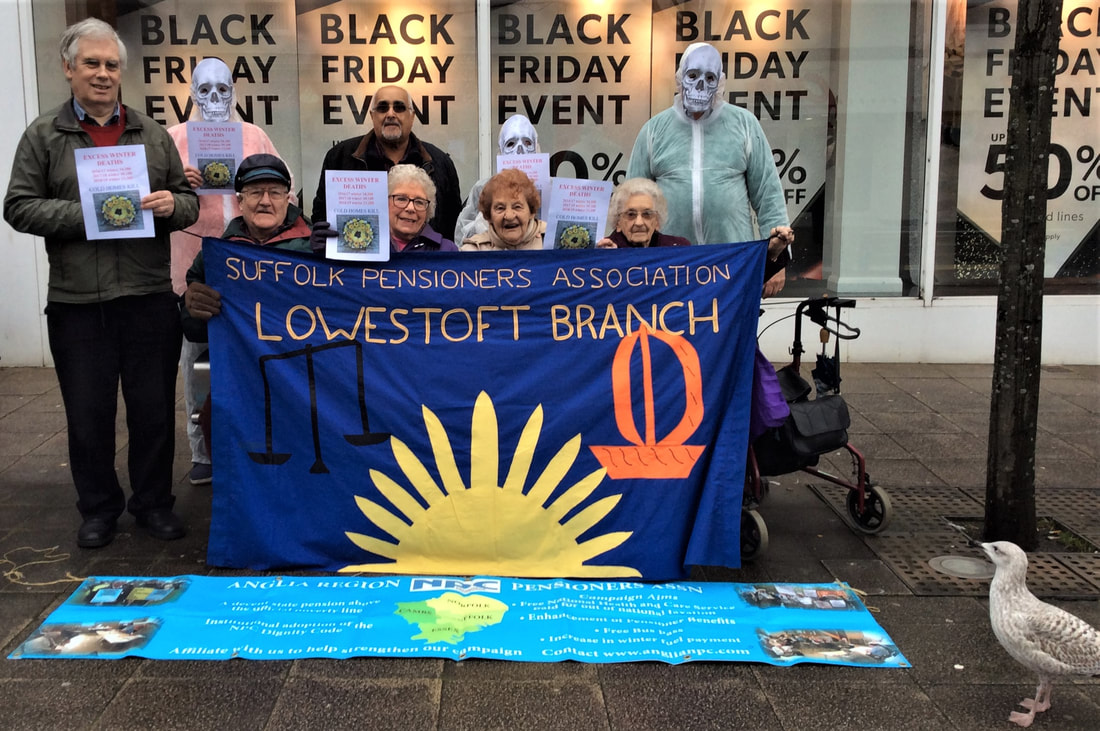 Indoors at the 60+ Club, Lowestoft 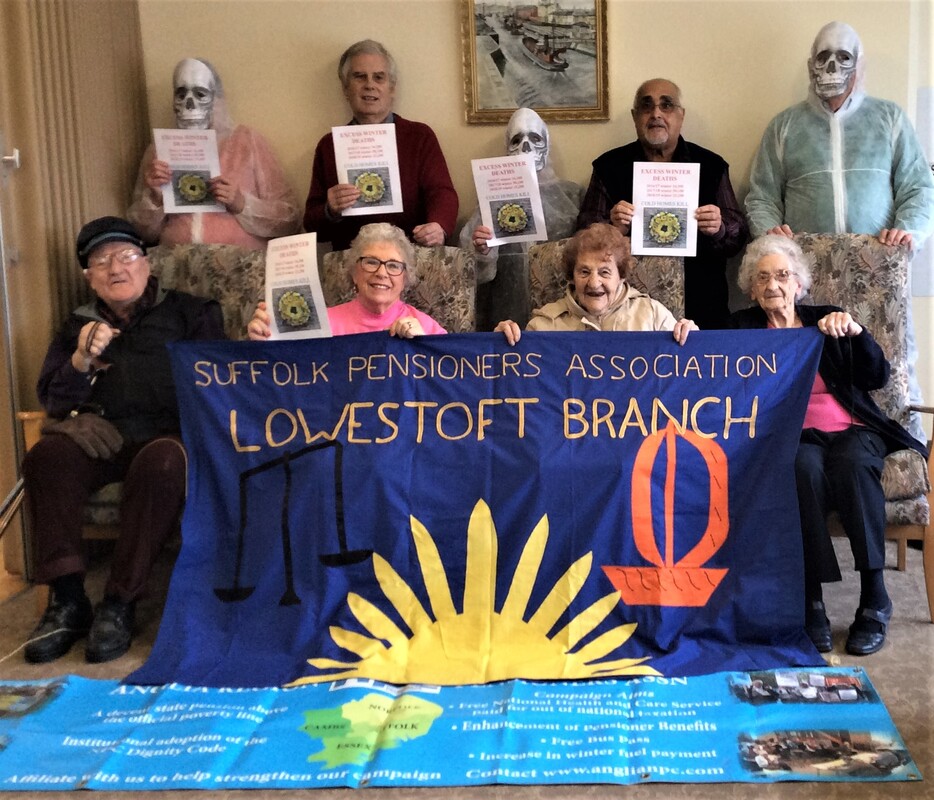 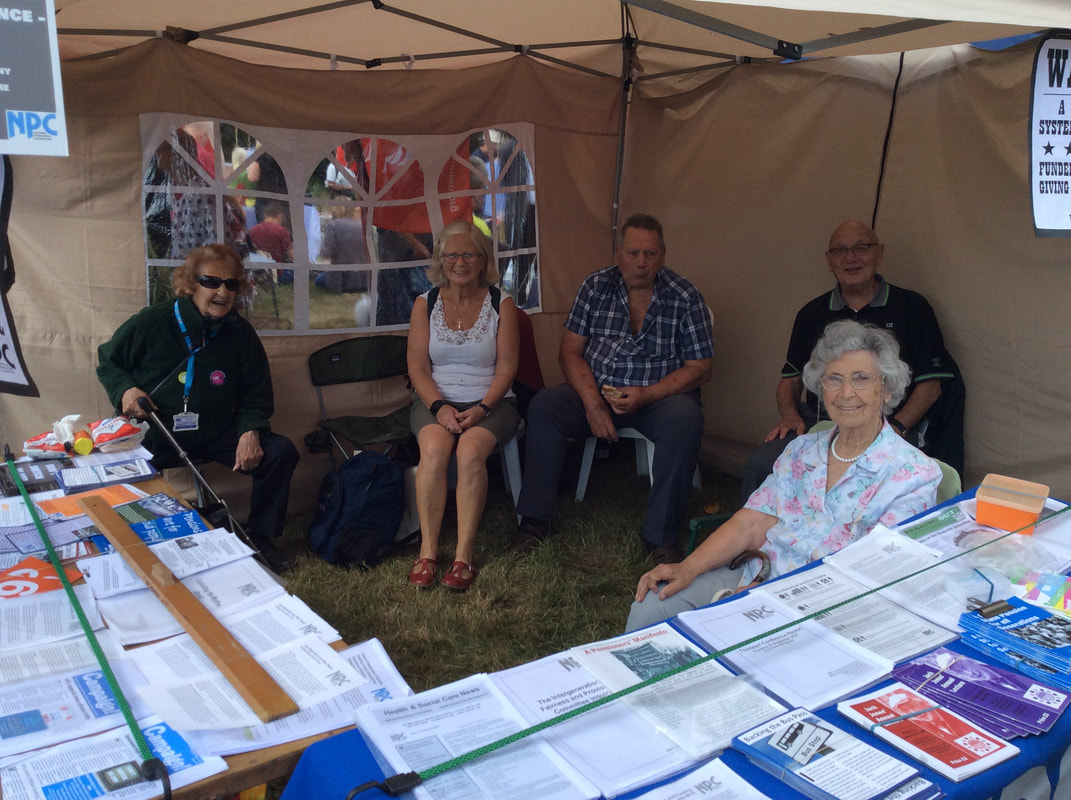 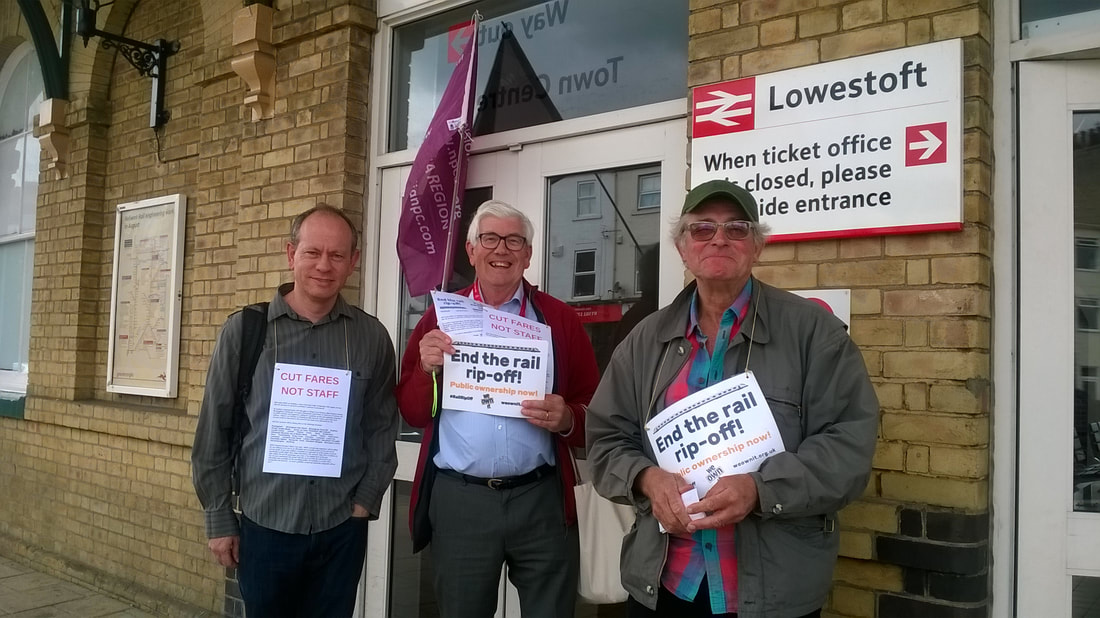 ABOVE: Anglia Chair Chris Brooks centre, with Stephen left and Richard right, all members of Lowestoft Coalition Against the Cuts, protesting outside Lowestoft Rail Station, the most easterly in the country, for www.weownit.co.uk on Wednesday 14th August 2019, the day 2020 fares were announced to be increased by an average of 2.8%.

BELOW: Anglia chair Christopher Brooks, also a CAFOD and Christian Aid supporter, represented the East Anglia Region's NPC at the Climate Change Mass Lobby around Westminster on Wednesday 26th June when around 10,000 constituents from all over the UK lobbied Parliament on the situation, the greatest inter-generational issue of our time. Chris was one of eight who lobbied the Waveney constituency MP Peter Aldous who gave a good hearing to those who met him later in Portcullis House and promised a further meeting back in Lowestoft. Though not able to go to the meeting himself, Chris met and chatted with MP Norman Lamb (Lib  Dem. pictured), shook hands with Rory Stewart (Conservative Prime Minister candidate) and spoke briefly to Hilary Benn (Labour) on his way back to Westminster underground station.
Anglia Region NPC Free Licence for the Over 75s Protest outside BBC Look East TV and Radio Norfolk Studios at The Forum, Millennium Plain, Norwich - Friday 21st June 2019.

At the Pensioners Parliament Blackpool, and afterwards at Salford Quays, Manchester for a Free TV Licence for the over 75s protest  June 2019 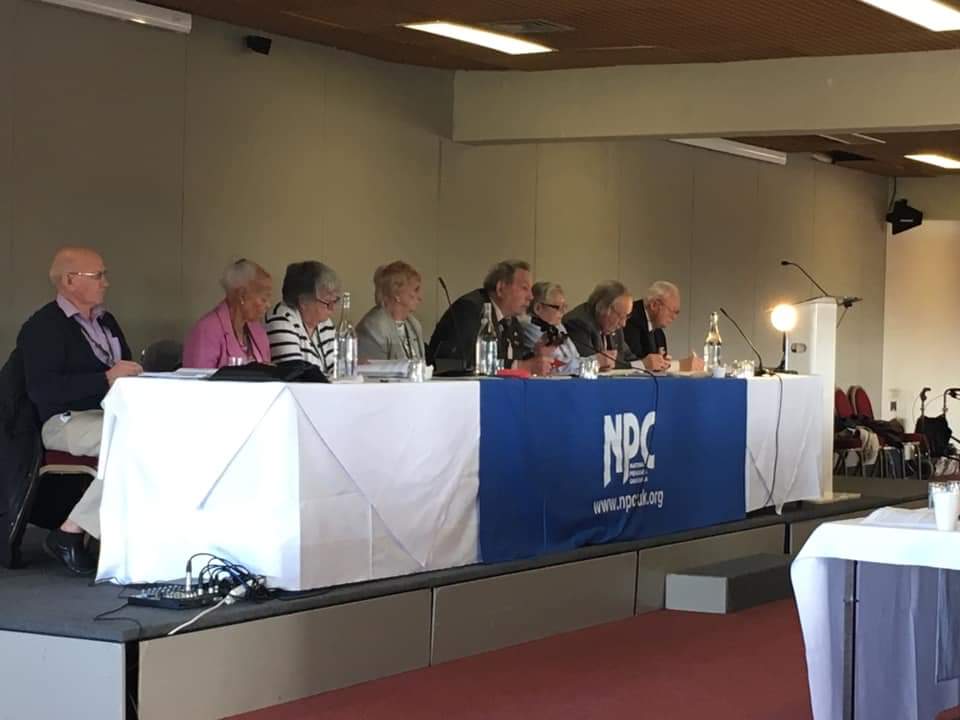 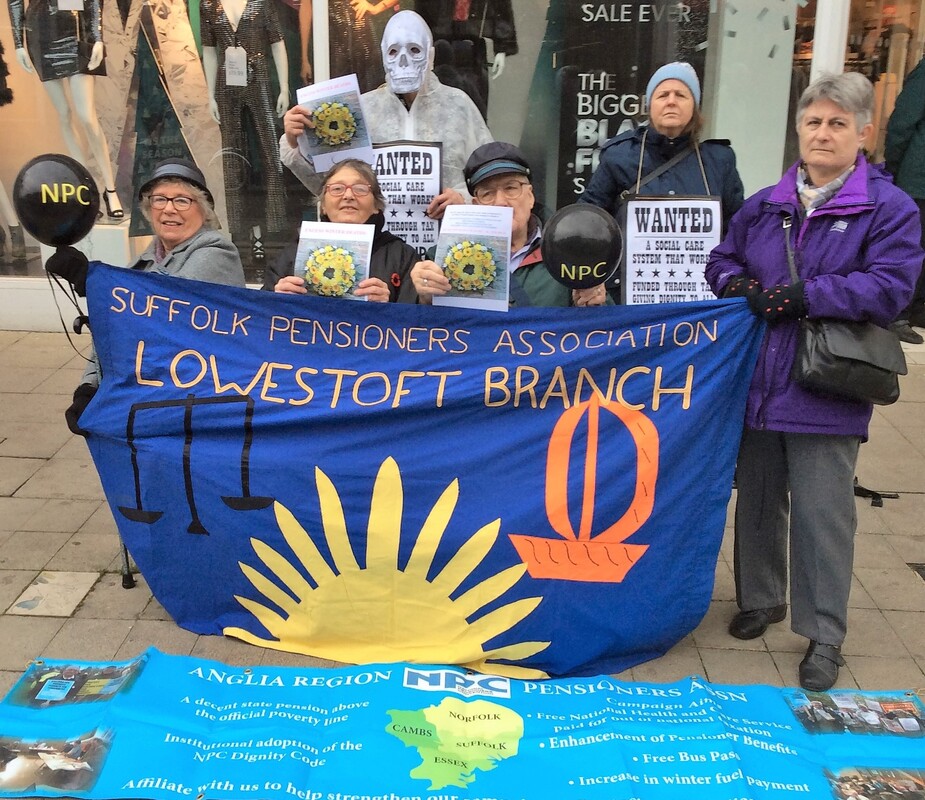 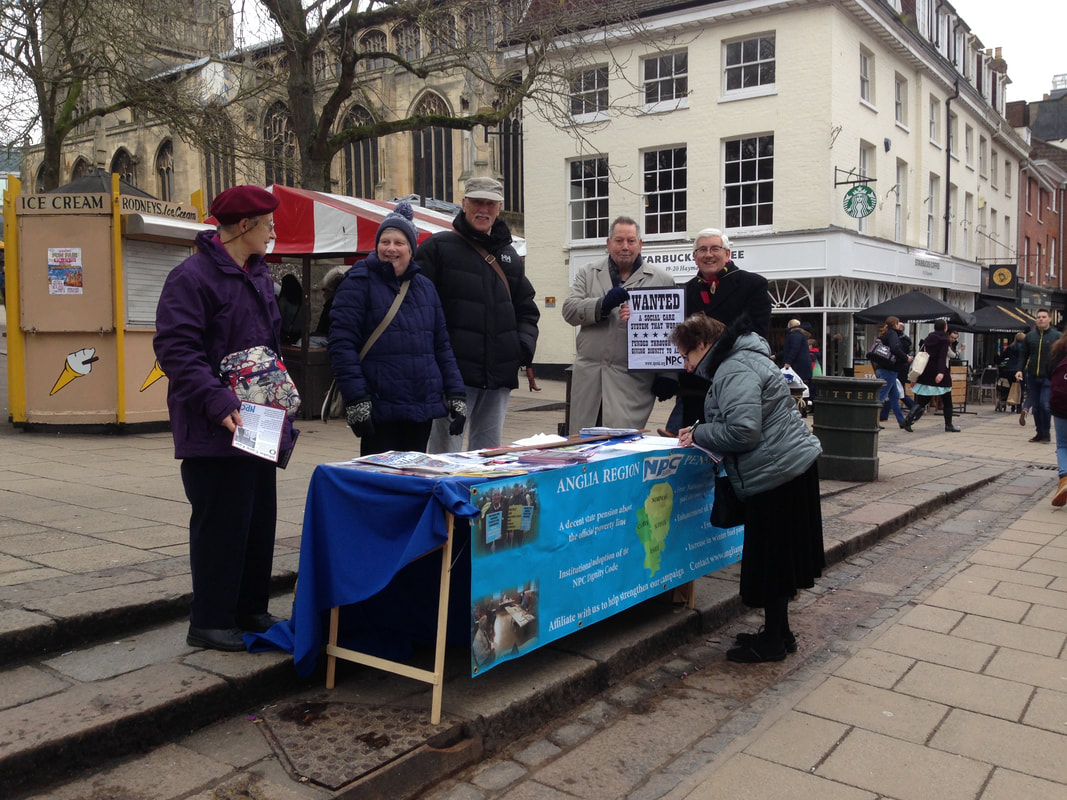 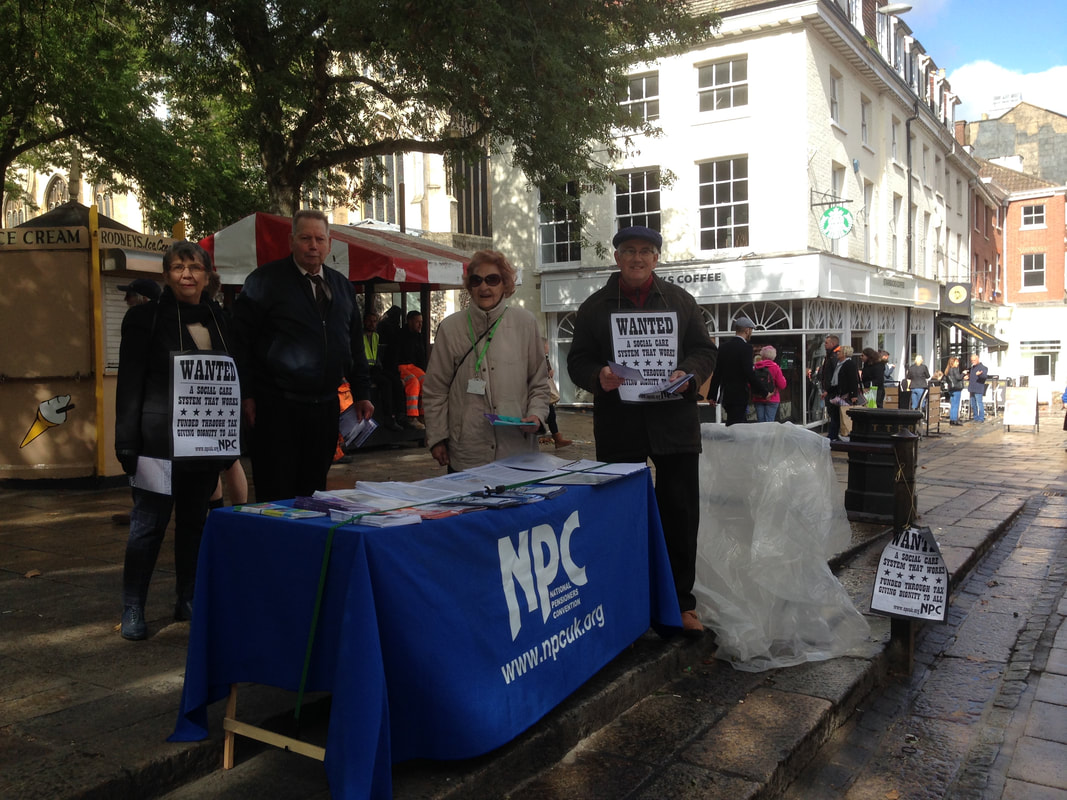 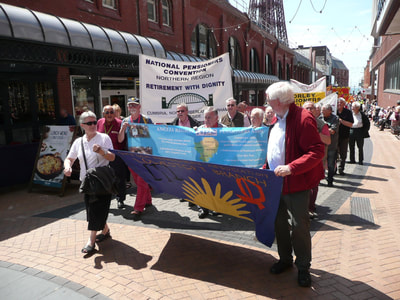 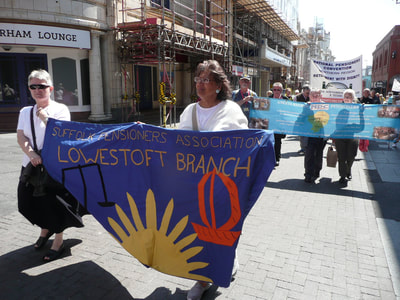 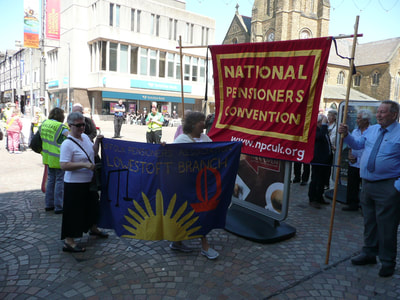 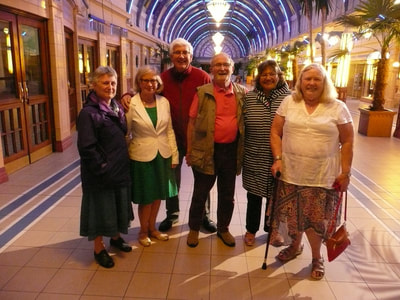 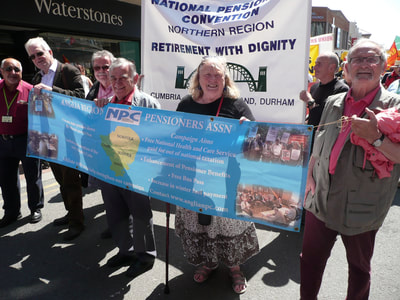 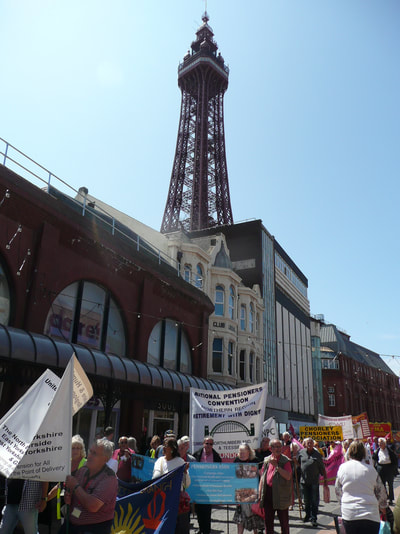 ​The NPC regrets the scale of excess winter deaths as highlighted by
the Office of National Statistics and campaigns to mitigate it. 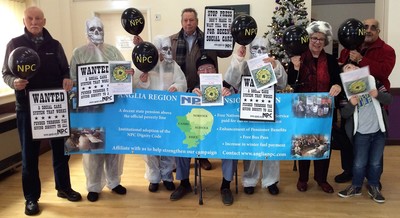 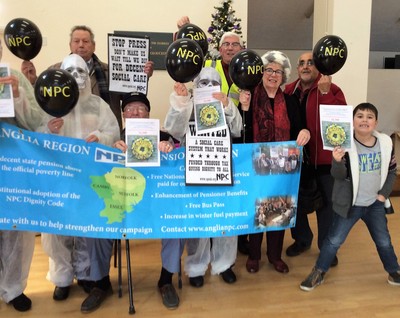 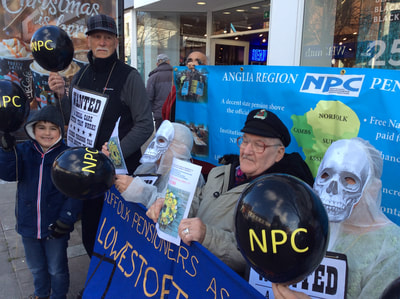 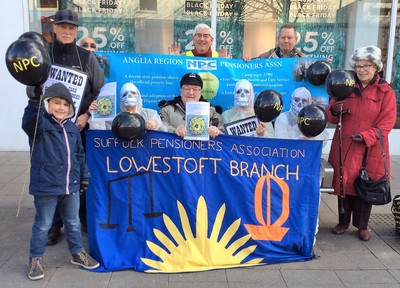 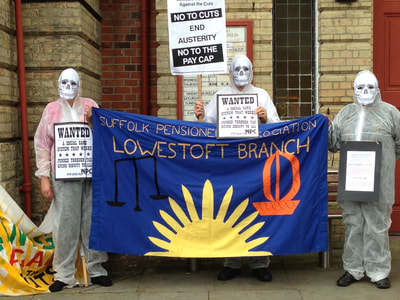 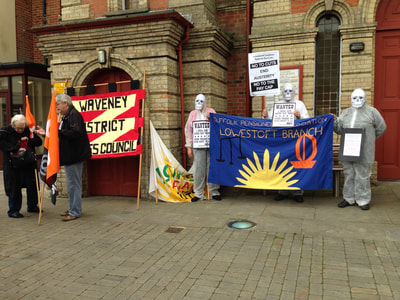 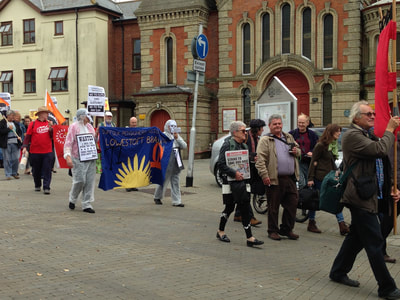 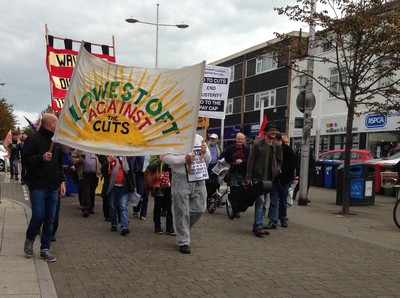 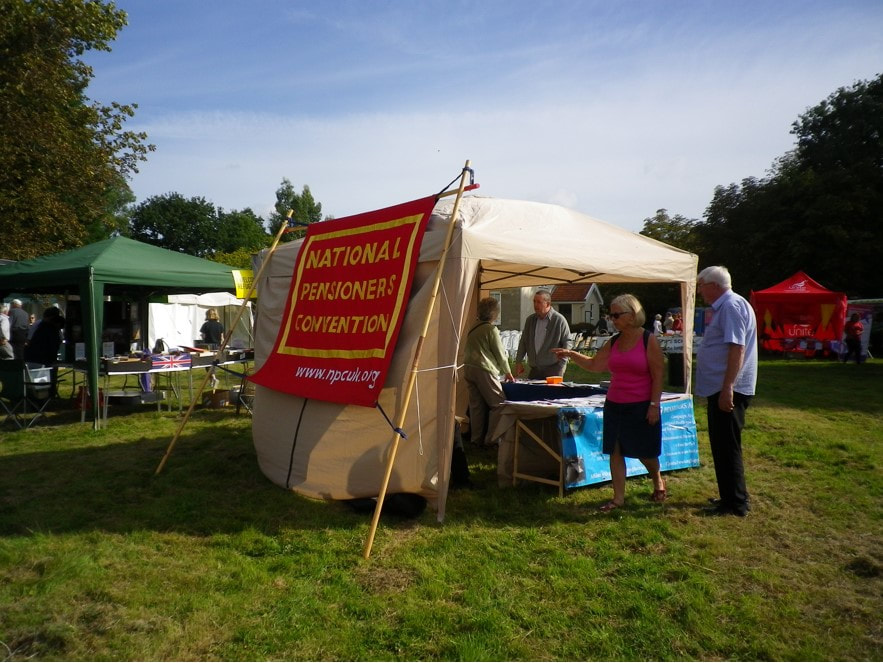 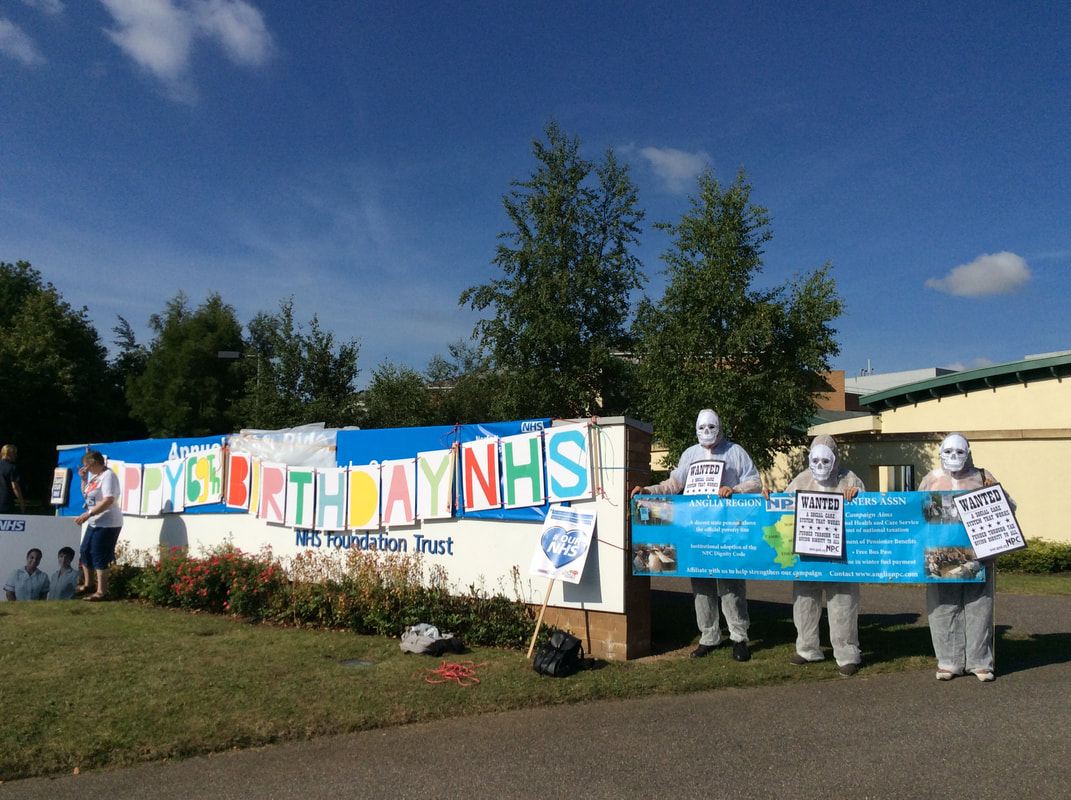 ​​Above Anglia skeleton crew members from Lowestoft celebrate the 69th anniversary of the NHS with other Norfolk health campaigners. 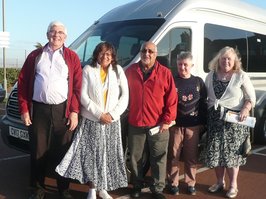 Views of the Pensioners Rally and  March before the 2016 Pensioners Parliament at Blackpool.

A member of the public signs her support at the Anglia Region information and leafletting stall for Dignity Action 'BETTER CARE NOW' on Saturday 30th January 2016 at Haymarket Norwich. 300 leaflets were handed out in two hours around noon by six Anglia members. The chairman had already circulated Norfolk Local authorities, four CCGs in Norfolk two District General Hospoitals at Norwich and Kings Lynn and 41 residential nursing and care homes in the Norwich area for their pledge of support for the NPCs Dignity Code. Norfolk MPs were being contacted by affiliated members in their particular constituencies for their support.
​
ATTLEBOROUGH Black Balloon release by Anglia Region members after the winter quarterly meeting 10/12/2015.
WINTERTON DUNES RALLY - November 2015
Rally of Anglia members Saturday 7th November 2015 at Winterton Dunes in support of keeping Public Toilets open during daytime over winter. Originally there was a plan by Gt Yarmouth Borough Council to withdraw from funding half of their public toilets and possibly close them, but this one at Winterton has been adopted by the local Dunes Cafe management and Coastwatch unit to be kept opened. 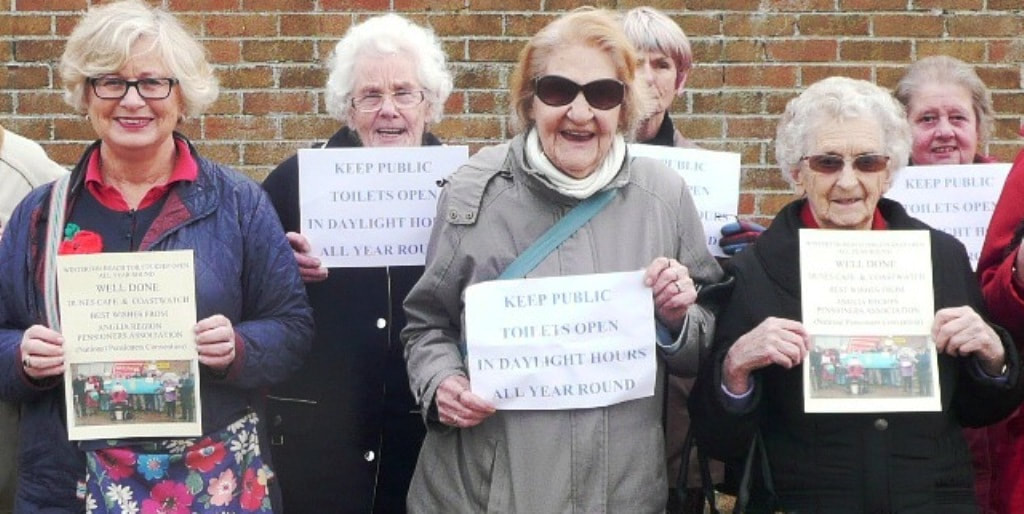 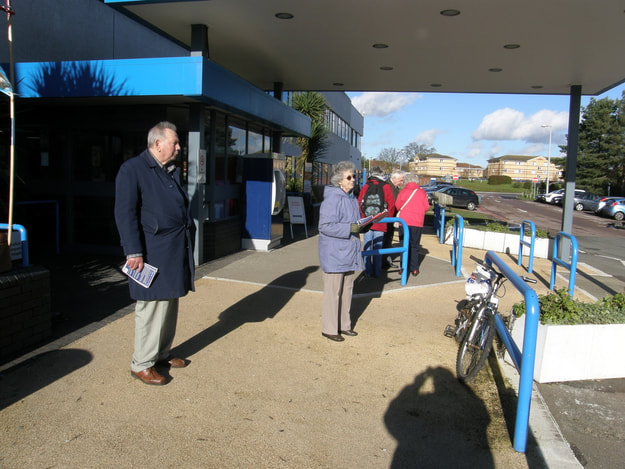